Please keep children and pets away from the swarm and do not harm the bees by spraying with pesticides.

Some Useful Information About An Amazing Phenomenon
Extracted from an article by Marion Ellis, Extension Apiculture Specialist, University of Nebraska

What is a honeybee swarm?

Honeybee swarms are a favorite topic of people who make horror movies. Actually, they are one of the most beautiful and interesting phenomena in nature. A swarm starting to issue is a thrilling sight. A swarm may contain from 1,500 to 30,000 bees including, workers, drones, and a queen. Swarming is an instinctive part of the annual life cycle of a honeybee colony. It provides a mechanism for the colony to reproduce itself.

What makes a honeybee colony swarm?

Overcrowding and congestion in the nest are factors, which predispose colonies to swarm. The presence of an old queen and a mild winter also contribute to the development of the swarming impulse. Swarming can be controlled by a skilled beekeeper; however, not all colonies live in hives and have a human caretaker.

When do honeybees swarm?

The tendency to swarm is usually greatest when bees increase their population rapidly in late spring and early summer. In Southeast Virginia, this is from late March to early June.

What should homeowners do about a honeybee swarm on their property?

When honeybees swarm they will settle on a tree limb, bush, or other convenient site. The cohesiveness of the swarm is due to their attraction to a pheromone produced by the queen. The swarm will send out scout bees to seek a cavity to nest in and will move on when a suitable nesting site is found. Rarely, swarms may initiate comb construction in the open if a suitable cavity cannot be found. You may want to contact a local beekeeper to see if the beekeeper would like to collect the swarm. Be prepared to answer a few questions about the swarm:

How does a beekeeper go about capturing a swarm of honeybees?

A swarm is looking for a new nesting site. A beekeeper can capture a swarm by placing a suitable container, such as an empty beehive, on the ground below the swarm and dislodging the bees at the entrance to the hive. The bees will begin to move into the hive, which can be removed after dark to the beekeeper's apiary. You can observe the bees scent-fanning at the entrance to signal the entrance to the new nest as the bees march into their new home. If for some reason the queen does not go into the new hive, the bees will abandon it and form a cluster where she lands.

What type of nesting sites will honeybees seek?

Honeybees are cavity nesters and will seek a cavity of at least 15 liters of storage space. Hollow trees are preferred nesting sites. Occasionally, bees will nest in the hollow walls of buildings, under porches, and in other "man-made" sites if they can find an entrance to a suitable cavity.  You can prevent swarms from nesting in walls by preventive maintenance. Honeybees will not make an entrance to a nest. They look for an existing entrance, so periodic inspection and caulking is all that is necessary to prevent them from occupying spaces in walls

Why are we observing fewer swarms than in previous years? 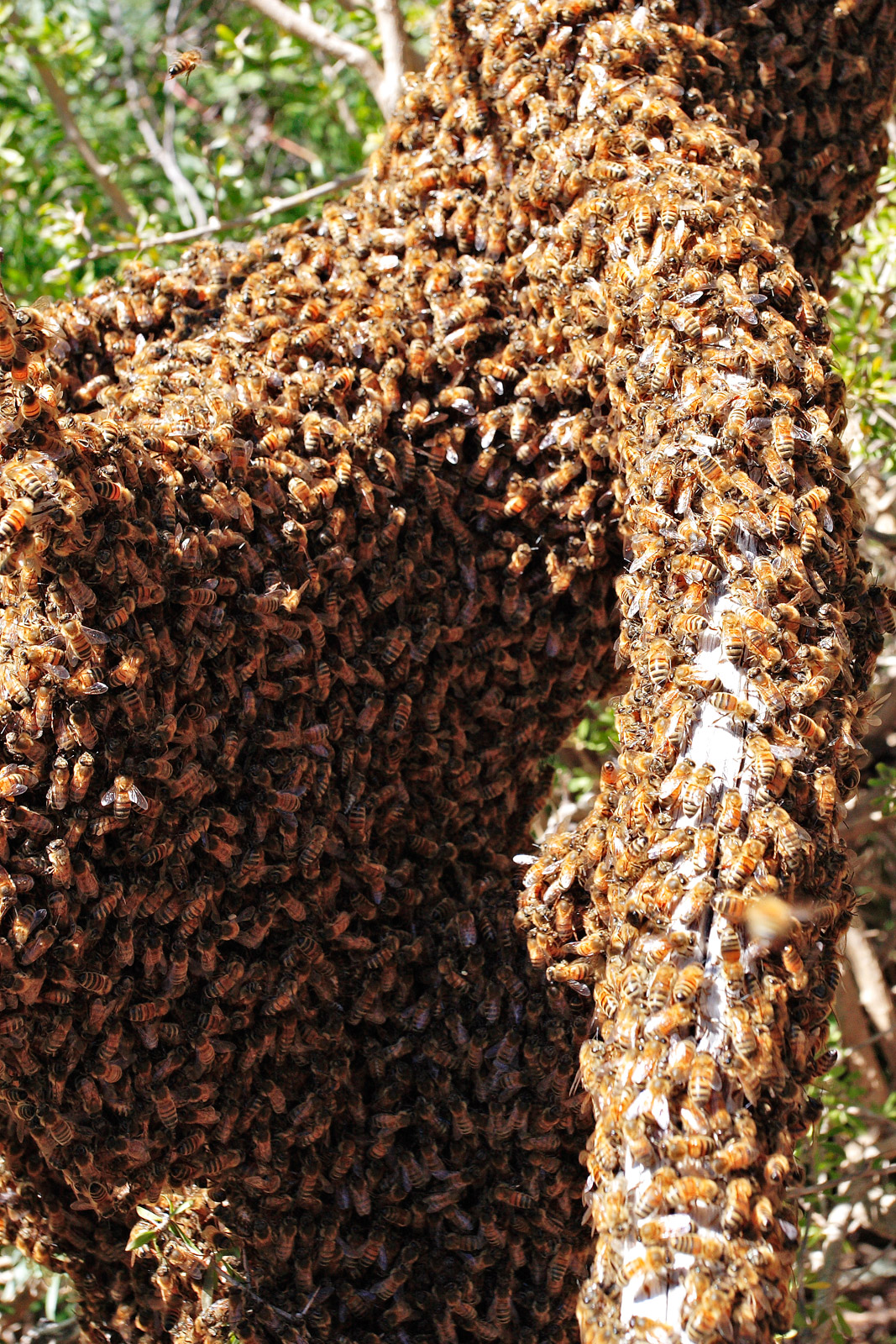 In the 1980's, two mites that parasitize honeybees were introduced into the U.S. They have spread throughout the state and have eliminated many wild or feral colonies. In addition, the number of colonies managed by beekeepers has declined during the past decade. Farmers and gardeners producing tree fruits, small fruits, forage legumes, oil seed crops, and vegetable crops requiring bee pollination need to consider pollination requirements as once abundant honey bee pollinators are no longer something they can take for granted. Managed honeybee colonies may be needed to assure adequate pollination of these crops.